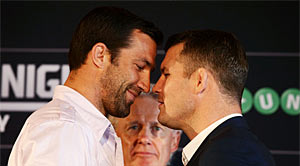 Sparks are going to fly this Friday night when Luke Rockhold and Michael Bisping face each other at UFC Fight Night 55 in Sydney, Australia, which is a main event not to be missed by any MMA fan because both fighters want to settle their differences inside the Octagon once and for all.

Beside this exciting middleweight contest, Engligh mixed martial artist Ross Pearson meets TUF 15 Finalist Al Iaquinta in the co-main event, which should also keep you on the edge of your seat. In addition, Robert Whittaker will meet Clint Hester, and Soa Palelei will exchange leather against Walt Harris.

All that and much more at UFC Fight Night: Rockhold vs. Bisping on Nov. 7 (in the U.S.) via UFC Fight Pass.