Holly Holm Set To Debut In The UFC In December 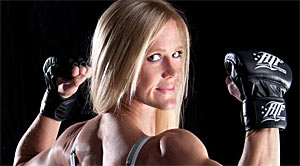 She’s pretty, she’s got knockout power, and she’s an undefeated former world champion boxer. American mixed martial artist, Holly Holm (7-0), is in her prime and she’s going to make a lot more noise in the world of MMA now that she’s signed with the UFC. Her long-awaited debut in the Zuffa owned banner is officially set in stone for UFC 181.

The UFC announced on Thursday that Holm will square off inside the Octagon against No. 13 bantamweight contender and former Ultimate Fighter semi-finalist, Raquel Pennington (4-4). At 32, Holm holds several titles across three different weight classes in boxing and is currently undefeated in MMA. Holm is a knockout specialist, she finished six of her earlier opponents in spectacular fashion by KO.

Make sure you watch her debut on December 6, 2014 because the 3-round bantamweight bout has potential to be Fight of the Night.