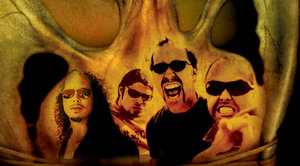 Has it really been 10 years since the release of Metallica: Some Kind of Monster? Indeed, July 9, 2004, was 10 years ago, and ever since the award-winning documentary has been the brunt of many jokes. Nonetheless, the out-of-print film will be released as a two-disc Blu-ray package come November 24, 2014. The new release will also contain a 25-minute bonus feature called Metallica: This Monster Lives, which was filmed at the Toronto International Film Festival during the release of Metallica: Through the Never.

Metallica: Some Kind of Monster is also going to be released digitally and on VOD.

Metallica: Some Kind of Monster Synopsis:

The documentary follows the band through three of the most turbulent years in their over three-decade long career, and gives viewers an incredibly raw and intimate look into the lives and psyches of the members of one of the most successful rock bands in music history as they battle their way through addiction, domestic life, backlash from their fans, and near-total disintegration during the making of their St. Anger album.

Additionally, Metallica will release a limited-edition 12” vinyl of “Lords of Summer.” Side A will contain the studio version of the song and a previously unreleased live version from the Rock in Rome Sonisphere Festival on July 1, 2014. Side B will feature a laser etching of the Metallica “M” logo. The vinyl will drop on Black Friday Record Store Day (November 28, 2014) and will only be available through independent retail and at metallica.com.