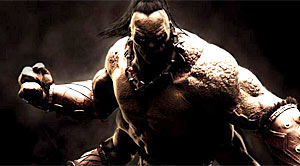 On April 14, 2015, the most brutal Kombat experience ever will be released worldwide for the Xbox 360, Xbox One, PlayStation 3, PlayStation 4, and Windows PC. Warner Bros. Interactive Entertainment and NetherRealm Studios confirmed on Friday, including a new bonus character that should reinvigorate any Mortal Kombat fan.

Goro, a four-armed half-human, half-dragon from the Skokan race is a character who first appeared before the final boss in the original Mortal Kombat is also confirmed to make a return in the 10th installment. Unlike the 1992 game, Goro is an additional playable character this time to the 24 that have been selected to appear in Mortal Kombat X. However, Goro does not appear to be a part of the main game, in order to unlock him you will most likely need to preorder MK X. Official details on how to get Goro haven’t be announced yet, so don’t take our word on the preorder rumor.

Mortal Kombat X is supposed to be a huge next-gen improvement over the last game that launched three years ago. It will feature X-Ray moves, special moves, and gruesome fatalaties. For the first time ever in the series, each character in Mortal Kombat X have three different variations, each featuring a different set of moves they can use during the match.