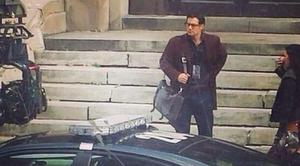 A few new pictures from the set of Zack Snyder’s Batman v Superman: Dawn of Justice have rolled in. There’s nothing exceptionally exciting about them, but they do show Henry Cavill as Clark Kent outside the Gotham City jail. Wonder who he was visiting or what the story is that sharp reporter is working on. The pics appeared yesterday via HenryCavillNews and Bananadoc. Batman v Superman: Dawn of Justice will open in theaters on March 25, 2016.