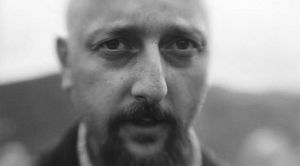 The day after screening Cybernatural‘s World Premiere on July 20th at Fantasia 2014, we had the chance to speak with the film’s director, Leo Gabriadze. The interview about the genre-redefining film, written by Nelson Greaves, was enlightening and interesting. Coming away from it, after learning that Leo was initially attracted to the project because of the bullying aspect, we have a sneaking suspicion that the soft-spoken Russian commercial director (who bears a physical similarity to Jean Reno) has a closer relationship to being bullied than he lets on.

Leo raised some good points about why Cybernatrual feels so familiar, despite its supernatural elements. We could tell that he also had some theological opinions that he wanted to express, but we didn’t feel it necessary to pursue that angle.

To set the scene, after having our Fantasia coordinator call Leo’s room and waking him from a siesta, we met up with Leo in his hotel’s courtyard under a blistering sun. As he smoked his slim cigarettes, we had to strain our ears to hear his words and we had to help him with his English in some spots, but in the end we came away with a great interview.

So, see Cybernatural whenever you can get the chance, and enjoy our interview with Leo Gabriadze.

Cybernatural made its World Premiere last night; how did you feel about the audience reaction?
I was surprised. It was very good, I thought. There were a lot of reactions, a lot of laughing, it felt like they were scared. It was good. [The audience] was very young, a lot of students, young professionals, it was closer to our demographic, maybe we could go younger a little bit.

What’s the rating on the movie?
We don’t have a rating. There’s a lot of cursing there, so I guess an R. I don’t know how it’s done in America, but there’s a lot of “fucks.”

The subject matter, it’s very close to what school teenagers go through at this point, so it would be a pity if they don’t get to see it because it is for them I guess because it’s very much what’s hurting them… of this epidemic that’s happening right now.

With cyberbullying?
Yes, cyberbullying. We all, more or less, went through that ourselves. We witnessed it firsthand. It’s scary, it’s ugliness… sometimes bullies themselves become bullied. Anybody can be a bully; it’s so easy to fall into that crack to become a bully. It’s out of control. I said from the stage yesterday, when I was a kid we had in school proper bullies; we knew them, we were scared of them, we lived around them, we knew that the guy could come and be really rough. Now they’re hiding everywhere and I can be one myself, that’s the most dangerous part about it.

When we were kids it was more of physical thing and now it’s psychological…
Yeah, it’s psychological. It used to go away. One week you’d walk around with this pain in your heart, you would wish nobody knew about it, now it never goes away. It’s there. And what happened now with Google being sued by the Spanaird that he had the right to be forgotten. Generally, for humans the ability to forget is a big thing to be happy. So much stuff happens in life with everybody that if we weren’t able to forget about it, we would be really unhappy people. And now with computers, because that thing doesn’t know how to forget, it’s all there and we’ve lost the ability to forget.

Also, the Q&A session after the film was partially held via Skype; was that the first time something like that has been tried?
Yeah, I never participated in anything like that. But it was somehow appropriate (laughs).

Will there be a Cybernatural sequel? Find out after the jump…