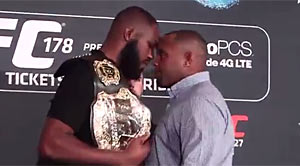 Jon Jones vs. Daniel Cormier, the most anticipated fight of the year just got postponed from Sept. 27 to Jan. 3. Sources are saying the light heavyweight title bout is officially moved to UFC 182 because Jones suffered a torn meniscus in his left knee and a sprained ankle during wrestling training earlier this week.

A very disappointed Cormier believes the delay will give him more time to get completely healthy too since DC also has a pre-existing knee injury that has not fully healed yet.

It’s very disappointing, I started to train very hard. It’s a little discouraging, but now I have time to get completely healthy. I don’t know how hurt Jon is but we have to remember that I took this fight with a pre-existing (knee) injury. I could have fought through it, I just wish he would have done the same.

According to DC, UFC CEO Lorenzo Fertitta assured him he will get the title shot over Alexander Gustafsson, who is expected to be ready to fight around that time in January.

As a result of this, UFC featherweight champion Demetrious Johnson will defend his title against Chris Cariaso on the main event of UFC 178.