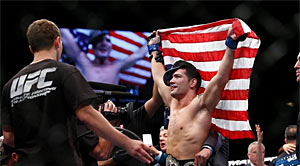 The UFC announced that former champion Vitor Belfort was granted a license to compete in the state of Nevada at a commission hearing held today. A winner of three straight, Belfort will now face UFC Middleweight Champion Chris Weidman in the main event at UFC 181 at the Mandalay Bay Events Center in Las Vegas on Saturday, December 6th.

Since returning to the UFC in 2009, Belfort has scored victories over some of the biggest names in the sport, including Rich Franklin, Yoshihiro Akiyama, Anthony Johnson, Michael Bisping, Luke Rockhold, and Dan Henderson. Now he’ll challenge the Champion Weidman, who is the only man to defeat UFC legend Anderson Silva twice. The 30-year-old New Yorker is fresh off a victory over Lyoto Machida early this month in a candidate for 2014 Fight of the Year.