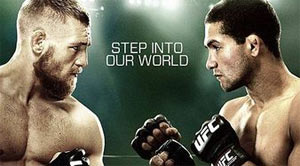 Are you still having doubts about UFC featherweight prospect Conor McGregor? If so, then you may want to watch this highlights video of his recent bout with Brazilian mixed martial artist Diego Brandao at UFC Fight Night 46 in Dublin, Ireland. It will most likely change your view on the Irishman, if you’re not already a fan of his. The bout took place on Saturday night with McGregor winning his third fight in the UFC since his debut last year against Marcus Brimage.

McGregor also picked up his first Performance of the Night bonus award after defeating Brandao via TKO in the first round.

Check out his awesome performance, including the official UFN 46 fight results right below.