Who Is Conor McGregor? Find Out Here 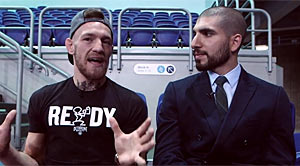 Donald Cerrone settled his business with Dan Miller last night inside the Octagon at UFN 45 by TKO, now, its Conor McGregor’s turn to show the world he has what it takes to defeated Brazilian mixed martial artist Diego Brandao. They collide this Saturday night at UFC Fight Night 46 in Dublin, Ireland.

Since McGregor is fairly new in the UFC featherweight roster, fans of his might want to dip into this new video to learn more about the man’s past and what he thinks about his future in the UFC. MMA Fighting’s Ariel Helwani covers it all with McGregor, including the big event that should propel him closer to a title shot, if he destroys Brandao impressively.

Just hit this link to watch the exclusive video over at MMA Fighting, and enjoy!