New Music: Electric Wizard “I Am Nothing” 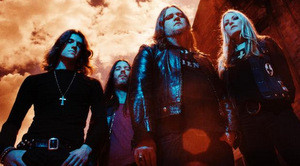 Electric Wizard says that it’s Time to Die. Better hope that you’re right with God, or that you’ve been evil enough in this life to have some privilege in hell.

It was just over a week ago that we brought you news of the bands forthcoming album, Time to Die, and now we have the first track to indulge in. “I Am Nothing” is a spooky, doomy, evil sounding track that’ll have your parents worried that you’re performing occult rituals in their basement.

Head on over to noisey.vice.com to scope the track.

It was the year I became a metal-head. It was heavy shit for real – there was no way you were ever going to get a decent job. So I became a Satanist, I dug up a grave, I got into tape trading, I had a one-man noise/black/death metal band called Regurgitated Guts, and there were loads of documentaries on TV warning us not to listen to the devil’s music…

We’re still keeping an eye out for the release date for *Time to Die, as well as other details. As soon as we know, we’ll be sure to Yell about them.