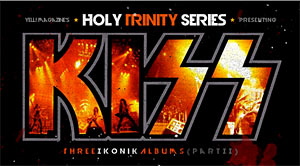 In 1992, Revenge seems like an unlikely success, though it did break into the top 10 in the U.S. (the first KISS album to do so since Dynasty) for a short period. Amidst the ailing and ultimate death of drummer Eric Carr, reported Vinnie Vincent renegging on songwriting agreements, ghost musicians, and more, 1992 also saw Nirvana’s Nevermind hit Number 1, Kurt Cobain married Courtney Love, Frances Bean was born, Axl Rose caused a riot in Montreal, Vibe magazine launched, and just about anywhere you turned you could hear one of the following: “I Will Always Love You,” “Smells Like Teen Spirit,” “End of the Road,” “Rhythm is a Dancer,” or “To Be With You.”

All in all, it wasn’t prime time for Revenge. But Revenge was just that. While its recording is pristine and a number of tracks are full of fun and hope, on a whole the album is rough and heavy, if not angry (although not as angry as the nearly vaulted Carnival of Souls).

Revenge touches on several themes, ranging from religion to stripper anthems to odes to chubby chicks to love ballads to rock anthems. It’s an all around album with a little bit for everybody. And Gene Simmons was fully onboard taking over vocal duties on five of the albums 11 vocal tracks. Despite the turbulent times, this album felt cohesive and like everyone involved was having fun together for the first time in a while.

Revenge marked the beginning and end of KISS’ fourth successful era of sound and style before coming full circle and revisiting the ‘70s. I know the reunion happened just four to five years after Revenge, and I wouldn’t trade that for anything, but I do wish that KISS had moved forward with the brand of rock/metal seen on this album.

Revenge is truly one of the best KISS albums.