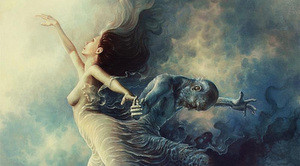 To pigeonhole San Francisco’s Fallujah as an “Atmospheric Death Metal” couldn’t be more accurate. The band’s new track, “Sapphire,” demonstrates exactly how this band is taking Death Metal to another level — and it’s not some pretentious hipster crap either.

There are so many layers and aspects to be enjoyed in “Sapphire,” but take note of the dream-like/atmospheric qualities in the keyboards and a number of the guitar solos. But the “death” in Death Metal isn’t lost; the riffs are brutal, the vocal growls are violent, and the drumming is a veritble assault. It is a perfect marriage of Progressive Metal and Death Metal.

“Sapphire” comes off Fallujah’s upcoming album, The Flesh Prevails, which is due out July 22, 2014. Pre-orders packages are available at: indiemerch.com

Fallujah’s journey into Progressive Death Metal didn’t begin with The Flesh Prevails. Formed in 2007, Fallujah’s upcoming release follows their 2011 full-length, The Harves Wombs, and 2013’s EP, Nomadic. Both of which were criticaly acclaimed.

The Flesh Prevails was mixed, mastered, and engineered by Zack Ohren (Animosity, Suffocation, All Shall Perish), and features guest appearances from guitarist Christian Muenzner (Obscura, Necrophagist) and the voice of Roniit Alkayam. The cover artwork was a collaborative effort between Poland’s Tomasz Alen Kopera and Fallujah vocalist, Alex Hofmann.

If you’d like to see Fallujah in concert, they’re playing this year’s Summer Slaughter Tour alongside Morbid Angel, Dying Fetus, The Faceless, Goatwhore, and more. For ticket info, go to: www.thesummerslaughtertour.com