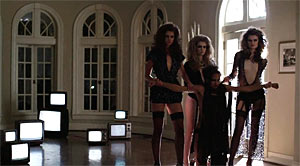 I dig the “Teens Are Really Awful People” subgenre of film, which includes movies like Spring Breakers, The Bling Ring, and even Carrie. The idea that everyone from the ages of 14 to 18 is a monster is A) factual, and B) getting increasingly more popular, and now, even the V/H/S franchise is putting a spin on the idea with V/H/S Viral, which “focuses on fame-obsessed teens who unwittingly become stars of the next Internet sensation.” I will bet 20 dollars that the “next Internet sensation” is either murder or something only slightly less terrible.

This popular anthology series has had two pretty successful entries, with segments from talented directors like Adam Wingard, Ti West, and Gareth Evans. Obviously, as with most anthology horror works, there have been some blunders (not everything can be Creepshow, is what I tell myself repeatedly, every day), but the best part about creating films in this fashion is that if you hate the static monster stalking untalented teens in the woods, you know that it will be over mercifully soon.

V/H/S Viral is being produced by The Collective and Bloody Disgusting.