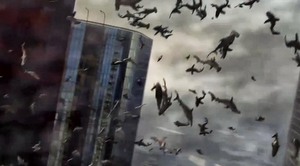 Sharknado 2: The Second One isn’t even in the water yet and SyFy has gone ahead and ordered up a third helping of Sharknado. Say what you will, but there can never be too many shark movies, just like there can’t be enough penicillin in a hooker’s purse.

According to AdWeek there’s no premise for the third installment at present, but word is that it will include the primary cast members from the first two movies — if they don’t get eaten.

Tara Reid and Ian Ziering return in Sharknado 2 to save New York City, but when the announcement that a second movie was going to be made, tons of actors applied for a cameo appearance — imagine fat kids running a stampede on a free Chinese buffet. So, who landed a part? Vivica A. Fox, Kari Wuhrer, Kelly Osbourne, Andy Dick, Billy Ray Cyrus, Mark McGrath, Kurt Angle, among many others. No doubt Sharknado 3 will attract a new batch of actors looking to be a part of the fun.