Scanners To Get A Criterion Release In July 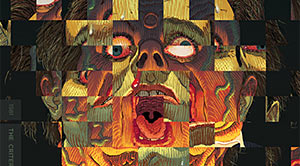 I love the Criterion Collection. A lot of people know it only from the shelf in the back of the Barnes & Noble Movie section where every disc costs $40 and all the movies are about people whispering slowly in foreign languages to one another. But that’s only half true. Barnes & Noble prices all their merchandise like they’re secretly snickering “Sucker…” as the cashier runs your credit card. In reality, even for horror fans, the Criterion Collection has given us a huge amount to be thankful for, like great editions of films such as Eyes Without A Face and Island Of Lost Souls. All Criterion needs to do is get around to releasing Basket Case and we’ll be square.

Until then, they’re putting out David Cronenberg’s Scanners for everyone to enjoy. Even if you’ve never actually seen this movie, you know about it, mainly due to the fact that it’s turned telekinetically charged, exploding heads into a household thing. Criterion usually does great work with its cover art, and the Scanners Blu-ray/DVD is no different. Face melting is an art, damn it.