Whitechapel To Hit The Road With DevilDriver + In-Studio Video 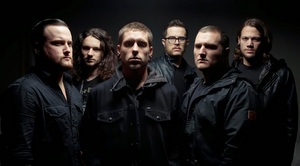 As you might know, Tennessee-based Whitechapel is just about to drop its fifth full-length album, Our Enless War, and preparations are underway to promote the shit out of it. The two most recent announcements include the news that Whitechapel will embark on a co-headlining tour with DevilDriver and the first in-studio video clip (in the player above).

The Whitechapel/DevilDriver tour gets underway on May 17th (see below for dates). And the in-studio video plays more like a mini-doc, garnering a shit ton of respect for the band.

The new album, Our Endless War, is scheduled to be released on April 29th, via Metal Blade Records

About the upcoming tour with DevilDriver, Whitechapel stated:

We’re stoked to announce our tour with good friends DevilDriver. We’ve played several shows with them before and really enjoy performing and hanging out with them and believe that combining together to make one big brutal tour only made sense. Rounding out the rest of the bill are other incredible acts Carnifex and Revocation, with two hot up-and-coming death metal bands Rivers of Nihil and Fit for an Autopsy. Can’t wait to take this tour across the country and decimate every city!”

Whitechapel will have an additional tour prior to co-headlining with DevilDriver. This one gets going on April 16th, and includes a stop at the New England Metal & Hardcore Festival on April 18th.