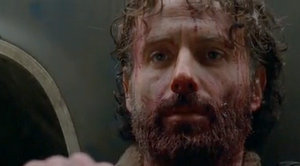 What a delicious cliffhanger we were given to conclude Season 4 of The Walking Dead! And the buildup to this episode’s ending was all intensity, simple storytelling at its finest giving us a well-deserved and satisfying payoff for our patience since the mid-season return.

Two things needed to be dealt with in the finale: Joe and his group of marauders and the arrival at Terminus. Yet the episode opened with a flashback to an earlier time, a time not long before the virus, which had me thinking, “Now what? How are they going to screw us this time?”

Gears shifted quickly enough as we were shown Rick with his back up against a car, covered in blood, and clearly in shock. When, however, wasn’t exactly obvious. Yes, it was a pretty tame and mysterious opening before the credits, but I think all of our curiosities were piqued.

Walkers as a threat have taken a backseat, only rarely and briefly showing up to remind us that they are still there. The real threat now is man, and more specifically man vs. man.

“A” (the oddly named title of this episode, which I’ll tell you about later) was perhaps the most visceral and violent episode in the entirety of The Walking Dead television series. And “A” made it abundantly clear that violence in this new world is OK and expected if survival is the goal. After the scene between Joe and Rick, we learn just when a blood-soaked Rick was sitting with his back up against a car. At this moment, a newly reunited Rick and Daryl have a conversation and Daryl says, “Hey, what you did last night, anybody would’ve done that.” To which Rick replies, “No, not that.” And Daryl answers back, “Something happened. That ain’t you.” And in Rick’s following reply, between the lines, we get to know what it takes to survive, “You saw what I did to Tyreese. It ain’t all of it, but that’s me. That’s why I’m here now, that’s why Carl is.”

Joe was right when he explained to Daryl that the new world is “survival of the fittest,” however, Joe and the marauders weren’t anything but a pack of violent litter runts that hadn’t yet faced a true alpha male like Rick. So when they did sneak up on Rick, Michonne, and Carl they really didn’t know what they were getting into.

As an audience, we all expected this confrontation to be violent, but the level of violence was more than white knuckle, it was stomach churning. From Carl being raped (much less believable since actor Chandler Riggs’ growth spurt this season) to Rick biting Joe’s throat out to Rick stabbing Carl’s rapist over and over and over and over again, this was the most violent scene of the series. We’ve had the very fun man vs. man confrontations between the prison and Woodbury and the prison and the Governor as Brian, but this was the first time that it was so real, so palatable. It was the first time that it emphasized how the world had changed outside the confines of the prison and our beloved tribe.

After Daryl and Rick’s “I love you, man” and “This is who we are now” conversation, the four of them hit the tracks toward Terminus. Michonne and Rick have a conversation about being OK about the violence that happened the night before. Rick asks “How?” which I thought had a meaning of “how are they OK?” Michonne, apparently interpreted it differently and answered that she’s OK because Rick is OK… a reference to Rick’s previous psychological break.

La-di-da, Rick, Carl, Michonne, and Daryl finally get the surrounding area outside Terminus. Acting with prudence (hopefully inspired because of Michonne’s earlier comment about Terminus being legit), Rick wants to approach through the woods to see what’s what. Once they catch sight of the buildings, they split up to observe more, at which time Carl and Michonne share a moment where she tells him about how she lost her son Andre (and we learn who and why she had those chained, jawless Walkers). Rick, after observing this intimate moment, buries his bag of weapons, “just in case,” and then they all jump the fence and find their way into one of the Terminus buildings.

Once inside, they find some people at work: there’s a woman broadcasting in a droned tone that sounds like some WWII propaganda and what the rest are doing is unclear. When they announce their presence, they’re greeting by Gareth. Obviously, Rick and his group are extremely guarded, but they comply with what’s requested of them. After their weapons are inspected and returned, Alex takes them all out front to the main greeting area. There they meet Mary (the woman who greeted Glenn and the others last week) and Alex asks her to feed the newcomers. As they stand there waiting, Rick observes the other Terminus people in the area, noticing someone wearing riot gear from the prison, a poncho (I think Maggie wore it), and finally the watch Hershel gave to Glenn.

If you watched, then you know all hell broke loose. Under fire, the Terminus people aren’t shooting to kill, but to guide Rick and the others somewhere specific, and judging from the chewed up asphalt and cars they’ve done it before. Rick, Michonne, Carl, and Daryl are led into a room with candles everywhere, perhaps a memorial tomb with the words “we first always,” “never again,” “never trust” written on the walls. The only exit from that room open to them is marked with the letter “A,” as is the train car that they ultimately end up in (there, episode title explained). In the train car they are reunited with Glenn, Maggie, Bob, Sasha, Tara, Frank, Eugene, and Rosita. No doubt filled with a sense of vengeance and hope at being reunited with his friends, Rick says, “They’re gonna feel pretty stupid when they find out… they’re screwing with the wrong people.”

-As they’re about to be served some food, Michonne asks Alex why they let people in and Alex answers that the more people they let in the stronger they get. Does this mean they’re cannibals? According to legend, and popular film as of late, when cannibals eat their victims they inherit a part of their strength (or spirit or something like that).
-What do you think will happen when Carol and Tyreese arrive? Will they also be captured, or will they be more cautious and in being so, will they see Rick and the others being moved as prisoners to another location?
-Will Carol and Tyreese be able to save everyone?
-What did you think of the finale?
-Who do you think will die?
-What did you think of Rick’s flashbacks throughout the episode? It was pretty interesting how they all became relevant by the end of the episode.
-Speaking of the flashbacks, what kind of man is Rick setting Carl up to be?
-Where is Beth? Was she captured by the people at the Terminus?
-Could “A” also represent “Animal,” as Rick and anyone else living outside the Terminus seem to have become?