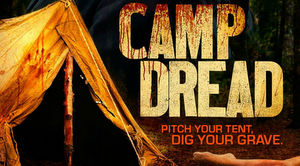 What do you get when you combine The Cabin in the Woods with reality TV and ’80s slasher movie reverence? You get the awesome looking Camp Dread.

The obviously campy and self-aware movie stars Danielle Harris, Felissa Rose, and Eric Roberts. Basically, Roberts plays Julian Barrett, a director trying to reboot his career and the hit ’80s slasher franchise he’s famous for, “Summer Camp.” So, he brings together a bunch of slackers, puts them in a summer camp environment, puts a $1 million prize on the table, and films it all reality-TV style. Needless to say, shit hits the fan.

Camp Dread looks like a fun ride for any horror fan, and you can enjoy it when it comes to DVD and VOD on April 15th.

The “Summer Camp” horror trilogy was one of the most popular franchises of the 1980s. However, the decade ended and so did director/writer Julian Barrett’s career. Now Barrett has a plan to resurrect “Summer Camp” in a modern reboot that entails using a reality show as its template and source of fundraising. Should it succeed, Barrett would once again be at the helm. Bringing together an eclectic group of young “contestants” as well as his former stars Rachel Steele and John Hill, Barrett seems to have put together a sure fire recipe for success. Then people start dying. For real. And “elimination” takes on a whole new meaning as “Dead.tv” clearly shows the slasher film has grown up.