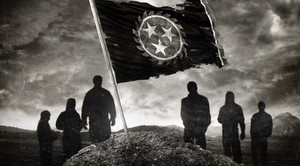 Make sure to check out the brutality of the first single, “The Saw Is The Law,” in the player above. Note Phil Bozeman‘s wicked flow starting at 1:19 in the song — it’s really addictive to the ears. If you like what you’re hearing, you can pre-order the new album via www.metalblade.com

We are excited to announce our fifth full length studio album, Our Endless War. In typical Whitechapel fashion, this CD takes the sound we have been developing over the past eight years of our career and pushes it to new levels. We want each record we release to sound different, and this one is no exception. With dashes of every record we have done so far mixed with the intensity of a new sound, this record is sure to please fans of Whitechapel, old and new.

For the artwork, the band turned again to Aaron Marsh, who supplied Whitechapel with its stark, arresting imagery, but again they wanted to push things to the next level. “With the sound maturing we felt like the artwork needed to reflect that. We also introduced a new logo – our old logo is classic Whitechapel, and that’s not something we plan on getting rid of, but as the band grows and changes we felt like we needed the logo to represent the maturity of this new Whitechapel.”

Leading up to the release of Our Endless War, Whitechapel has confirmed a string of dates, see below, including an appearance at this year’s New England Metal & Hardcore Festival. More dates including a North American co-headlining tour are in the works and will be announced shortly. Stay tuned to Yell! Magazine as new info becomes available.