Is It True: “Without Mustaine There Is No Thrash Metal”? 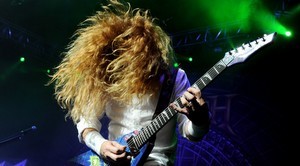 I don’t think that any metalhead out there can deny that they haven’t just absolutely loved something from Megadeth at some point in their listening career. For me, Megadeth ranks among the greatest bands of all time and I absolutely respect founder/guitarist/vocalist/songwriter Dave Mustaine for accomplishing what he has since being unceremoniously kicked out of Metallica. Whether or not his dismissal was justified, he undoubtedly had a profound influence on, at the very least, Metallica’s debut album, Kill ‘Em All, if not on the next couple albums as well.

Fact is, Mustaine overcame seemingly insurmountable odds, from being kicked out of what would go on to be metal’s golden god to living in that band’s shadow to dealing with addiction and abuse issues and so much more than can be listed here. It’s a true story of picking yourself up by the bootstraps.

Mustaine has also had his share of professional ups and downs, and maybe one of the biggest down is being perceived as a whinny bitch by many metal fans. I say, fuck you. I’m not a psychologist or therapist of any sort, but it’s obviously a defense mechanism, and in my opinion he’s entitled to having sour grapes. Besides, it’s those sour grapes that lit the fire, that fueled his rage, that motivated him… and in the end, there’s Megadeth. What have you done?

That’s just my opinion, which I’m sure is shared and argued against in equal numbers. But there’s also the opinions of Mustaine’s peers and other industry insiders. I recently came across these views and testaments of Mustaine’s success from his peers in the video posted above. I’m sure I’ve seen this very old clip before, but for some reason I felt the need to share it this time. In addition to loving Mustaine’s awesome quotes, I’ve included below some of my favorite quotes from the video, which should make any Mustaine supporter or Megadeth fan smile from ear to ear.

Blitz from Overkill said that “Mustaine was the best songwriter out of Metallica.”

They were always that band that you would look up to because they were such great musicians… I think they brought almost a jazzy feeling to the thing.

They were almost like a jazz band playing metal, that’s kinda like the vibe I got from them because there’s a lot of unexpected twists and turns on those first two records… and that just comes from Mustaine’s kinda sideways brand of guitar playing and that’s what’s always made him original.

I’m not sure who was speaking, but this is a fairly widely shared sentiment:

Megadeth changed my life. Metallica was great and I was all about it, but as soon as I heard Peace Sells But Who’s Buying, it was just over. I mean that was everything metal should be. It had power, it had speed, it had riffs, it had drums, it had political lyrics, it was perfect.

Another uncredited quote that I like about Mustaine’s songwriting: “The rhythms [are] almost as impressive as anyone’s lead playing.”

While I’m 100% behind what Scott Ian said, you just have to love the bold confidence from Mustaine in the following quotes:

I’ve been kicked out of Metallica, and a lot of people said that it’s fueled me to be faster and better in Megadeth, and that’s kinda true, but I was better and faster than them when I was in Metallica.

The sad thing, and this is gonna sound strange, when Kerry [King] was playing with Megadeth I showed him a lot of my style. Kerry is a good guitar player for rhythm he’s great. In Metallica, I was the only guitar player and a lot of that rubbed off on James, and in Megadeth it was all my guitar playing and hired hands that learned what I was doing. So, out of all of this, without, I mean this is totally going to sound arrogant and I’m sorry but I’m just telling you the facts, I’ve affected three bands out of the Big 5 [I think he meant 4]… I also know that these guys are all established now, they’ve developed their own style since then, and they’re very successful.

What do you think: Was Mustaine the best songwriter in Metallica? Would thrash metal exist as we know it today had Mustaine not been around?