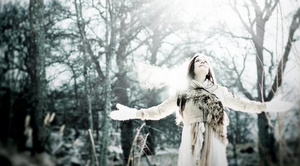 Former Nightwish frontwoman, Anette Olzon, has recently dropped her new video for the song “Lies,” which comes off her debut solo album, Shine. By her own admission, Shine is a departure from her symphonic metal work in Nightwish, and more aligned with “pop metal.”

Shine will be released in North America on April 8, 2014.

For the album, Olzon has worked with some big industry names, including producers Stefan Örn and Johan Glössner, co-producer OLZON alongside Johan Kronlund and mixers Kronlund, Nicklas Flykt, and Ronny Lahti. For the “Lies” video, she worked with metal video legend Patrick Ullaeus (Within Temptation, Lacuna Coil, In Flames, Sonata Arctica).

About the song, Olzon commented:

‘Lies’ is actually a divorce song. When I entered Nightwish, my [now] ex-husband wanted to divorce me. So in the middle of becoming a big singer in a big band and having my dreams fulfilled, I also had to go through a very hard divorce with a little son. I think I needed to write a song about that… That thing with Nightwish was also like a divorce, a really hard divorce. It’s always like that when people separate and go in different directions with hurt feelings.