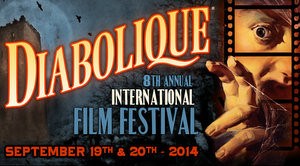 If you’re an aspiring filmmaker, pay attention. The Diabolique International Film Festival, held in Bloomington, Indiana, has put out its call for submissions. The eighth annual festival takes place on September 19th and 20th, so you still have some time, but you better hurry. Read the press release below for additional details.

Bloomington, IN – The Diabolique International Film Festival is presented by Diabolique Magazine, one of the fastest growing publications in the world dedicated to genre cinema. In addition, we are pleased to welcome Sony and FinalDraft as official Festival partners for 2014.victor

Join us September 19-20, 2014, in Bloomington, Indiana, for the premiere showcase of independent genre cinema, featuring horror, sci-fi, fantasy, and animation.

The Diabolique International Film Festival began life more than 8 years ago as the Dark Carnival Film Festival. Since 2007, we have screened over 250 films from more than a dozen countries, and we’ve had the honor of hosting visiting filmmakers from around the world, including Los Angeles, New York, Toronto, Spain, and the UK.

Over the years, we have gained a reputation as a festival that truly values independent genre films and the people who make them. Many of the movies from past fests have been picked up by major distributors, and our event has provided numerous networking opportunities. The publishers of Diabolique bring their industry connections and marketing reach to the table in a way that offers our filmmakers exceptional exposure for their films.

As a result, we’ve been featured in a variety of national publications, having been recognized by MovieMaker Magazine as one of the “Top 25 Film Festivals Worth the Entry Fee,” and one of the “13 Horror Film Festivals to Die For.”

The festival takes place at the historic IU Cinema on the Indiana University Campus. With state-of-the-art 2K and 4K digital projection (as well as 16mm and 35mm film projection) IU Cinema offers the highest possible projection quality. IU Cinema is also one of only a handful of theaters in the country that is THX Certified. This amazing venue is one of the keys to fulfilling our pledge to deliver the best possible festival experience for our patrons and filmmakers.

Visiting filmmakers are invited to attend our VIP Banquet at Scholars Inn. This restored 150-year-old historic mansion is the perfect setting for our VIP after-hours party. Since 2007, its dual fireplaces and huge outdoor decks have provided the backdrop for our guests and visiting filmmakers to get together, network, have fun, and share their experiences. This event includes an open bar, with a wine list featured in Wine Spectator. Seating is limited and reservations must be made in advance. (Additional events include panel discussions, filmmaking seminars, and filmmaker Q&A.)

The Diabolique International Film Festival is currently accepting submissions for 2014 and festival organizers are looking for original, cutting-edge independent films in the horror, fantasy, and sci-fi genres. Both short and feature-length films are accepted, as well as documentaries, animation, experimental, music videos, and trailers. The early-bird deadline for submission is May 31, 2014. (Filmmakers should visit www.diaboliquefilmfestival.com for more information.)

The Diabolique International Film Festival is pleased to announce our first annual Screenplay Competition for 2014. We are seeking original short and feature-length scripts in the horror, sci-fi, and dark fantasy genres.

The Diabolique Screenplay Competition is dedicated to discovering and supporting emerging talent, and we’re excited to be enlisting the help of an industry veteran. The winning feature and short screenplays will be chosen by Emmy and WGA award winning writer Victor Miller (Friday the 13th). Mr. Miller will also be providing written analysis of the winning screenplays. In addition, the winning screenwriters will receive cash and other prizes.

Our readers include professional, published writers, and all submitted screenplays will receive concise online feedback, three to five sentences in length. The object of our Feedback Service is to provide you with constructive criticism, outlining the strengths and weaknesses of your screenplay.
The Diabolique International Film Festival features a mix of 20-30 short and feature films. Events include filmmaking seminars, panel discussions, filmmaker Q&A, our VIP banquet, and festival pavilion.