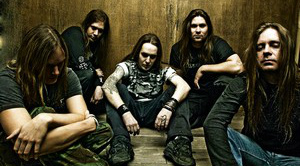 We’re confirmed to interview Children of Bodom within the next couple of days, however, there seems to be a chain of command issue, so we’re only 99% sure it’ll actually go down. But, still, in our anxious anticipation, we thought we’d bring you a second serving from the Finnish boys.

Formed in 1993 by childhood friends Alexi Laiho and Jaska Raatikainen under the moniker of Inearthed, Children of Bodom released their first album, Something Wild, in 1997. Since then, COB has released eight studio albums, two live albums, two EPs, two compilation albums, and a DVD. They’ve also kicked ass along the way, being a consistent Gold album seller, attracting legions of metal fans around the world, and becoming one of Finland’s best-selling band of all time.

The live performance above comes from COB’s Stockholm Knockout Live – Chaos Ridden Years DVD, which was released in 2006 and filmed in Stockholm, Sweden. Not only does the DVD capture the intensity that ripples throughout a COB concert, but it also includes a great reference to W.A.S.P.’s Blackie Lawless — oh, and a fair amount of bonus material:
-Chaos Ridden Years: The Children of Bodom Documentary
-Making of Stockholm Knockout Live
-Deleted Scenes
-Photo Gallery
-Promotional Videos:
“Are You Dead Yet?”
“Downfall”
“Deadnight Warrior”
“Everytime I Die”
“In Your Face”
“Sixpounder”
“Trashed, Lost & Strungout”

If you’re not a fan of Children of Bodom, you’re missing out, but having a good listen to this concert might just change your stance on the band. Though they’re considered melodic death and/or extreme metal, they combine a lot of the traditional elements of hard rock and thrash metal in their performance, i.e., muthafuckin’ solos. The dueling solo between Alexi (guitar) and Janne Wirman (keyboard) is especially awesome — even if, at times, it sounds like Eddie Van Halen and parts of that bit in Bill & Ted’s Excellent Adventure when Beethoven takes over the music department in the mall.