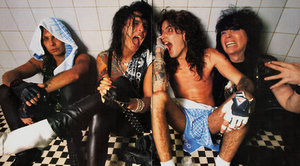 We ran this full concert from Mötley Crüe last November, but considering all the news about the classic band hanging up the ol’ touring hat we figured it would be a good time to reminisce.

By all rites, Mötley Crüe should never have made it past 1983’s Shout at the Devil and certainly not past 1984, when Vince Neil crashed his car in a drunk-driving incident that killed his friend and Hanoi Rocks’ drummer, Razzle. But, in the ’80s record labels protected their interests and with the Crüe being a rising star, they weren’t about to let the vocalist rot in jail. Whatever voodoo was played, Neil stayed out of jail on the condition that he remain sober and do a couple PSAs. So, Theater of Pain and then Girls, Girls, Girls happened… and there’s abso-fucking-lutely no way in hell Mötley Crüe should have made it past 1987.

The concert we’re giving you tonight was played in Tacoma, Washington, on October 15, 1987, roughly 2 months before Nikki Sixx’ lethal heroin overdose; he was pronounced dead on the way to the hospital. As the band’s primary songwriter, his death would surely mean the end, but as miracles would have it, he was only dead for 2 minutes.

If you watch the concert video closely, which went on to become one of the band’s most widely bootlegged videos, you can see in Sixx’ eyes that he’s way gone — he just looks so wasted and insane. If you read his 2006 book, The Heroin Diaries, then you know that his addictions had complete control of him at this point. Legend has it that Sixx’ mom went to the show that night, despite an unwelcome appearance at his hotel room before the show. She visited with his sister Ceci and her two young sons, and in a drugged-out state, Sixx told them to go away, calling them all sorts of disrespectful names. Also, a fan at the show died of a drug overdose.

The ’80s was a, to borrow a phrase, decade of decadence, and Mötley Crüe saw the extreme limits and surpassed them.

I love Mötley Crüe, but I generally hate them live (I find they suck). However, this show is an exception. It’s one of the best live performances from the band I’ve ever seen, either live or on video, despite mistaking Tacoma for Alpine Valley at the end of the show. I think this is largely due to the fact that Vince Neil actually sounds about as amazing as he ever could live.