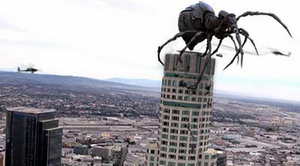 Who doesn’t love love the giant monster/creature feature genre? A genre steeped in such an unlikely scenario that you can’t help but have a good time watching it. Well, if you missed the limited theatrical run that Big Ass Spider had in October, you’re in luck; the Mike Mendez-directed film is coming to DVD, Blu-ray, and VOD on January 7, 2014.

To help promote the video release, the first three minutes of the film can now be seen (in the player above). The scene is funny as hell with the dramatic slow-motion and somber music juxtaposed with the ridiculousness of the situation. If that’s not the best sales pitch of 2013, I don’t know what is.

The discs’ anamorphic widescreen transfers will be accompanied by:
• Audio commentary: Grunberg and Boyar tell Mendez how they really feel about him
• Cast interviews
• SXSW featurette
• Theatrical and international trailers
• TV spots

A giant alien spider escapes from a military lab and rampage the city of Los Angeles. When a massive military strike fails, it is up to a team of scientists and one clever exterminator to kill the creature before the city is destroyed.