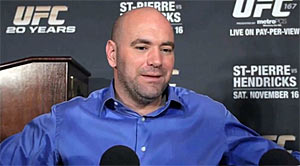 UFC 167 had its ups and downs, but the biggest let down of the night for most MMA fans, including pro fighters and UFC President Dana White was when Georges St-Pierre‘s hand was raised after a 5-round war with Johny Hendricks. According to the official scorecard, all three judges scored Rounds 2, 3, 4, and 5 the same way, and all of them favored St-Pierre in Rounds 3 and 5.

Despite the scorecard, almost everyone else still thinks Hendricks was robbed and White decided to take a bleak moment during the presser to blast the Nevada Athletic Commission for the lack of quality judging. White clearly thinks they will ruin the sport like they did with Boxing:

I think they need to step in immediately before they destroy this sport like they did with boxing, it used to be the best commission in the world. It’s absolutely incompetence. I’m f-cking scared to come back here and do fights.

It isn’t the first time there’s been controversy over judging and it won’t be the last. Personally, I don’t think the commission will take the matter seriously as they did with boxing, unless the UFC becomes more mainstream and is talked about in every news outlet. There’s still no real indication what the UFC plans to do about the problem in the future, but it sounds like it won’t be resolved anytime soon.

Now aside from bad judging, in the post-fight interview with UFC color commentator Joe Rogen, GSP hinted at retirement and during the presser it sounded more like he just wanted to take some time off to deal with his personal issues. Apparently, he can’t sleep at night and is going crazy.

However, White and UFC CEO Lorenzo Fertitta had a chat with a very emotional St-Pierre and indicated there will be an instant rematch with Hendricks sooner than later. Hendricks won’t need to worry about a possible interim fight:

I think he’s very emotional about some sh*t that’s going on with him right now and it’s really not that bad, but to him, it is. To him, it’s like the end of the world. He’s a mentally strong guy, he’s a hard working guy, he’s an honest guy, he’s a good guy. He’ll get it straightened out.

Once GSP fully recovers mentally and physically, he looks like he got run over a truck, we’ll shed more news on the rematch with Hendricks. Stay tuned for more on Yell! Magazine.