Jeepers Creepers 3: Is It Finally Going To Happen? 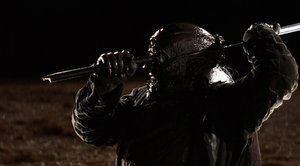 This is a franchise that’s had its fair share of difficulties, but it looks as though the third installment fans have been waiting for is finally going to happen. Shock Till You Drop and BloodyDisgusting are both reporting that Victor Salva (the man who directed the first two films and will direct the third) has stated that they are “close” to filming. In fact, back in October, Salva apparently spent a day filming.

Someone has basically gagged Salva, who could only say the following:

There may finally be some very good news for those waiting for the third Jeepers film to go before the cameras.

Official word on what direction Jeepers Creepers 3 will take hasn’t been revealed, and Salva has had a couple different scripts floating around. However, there is speculation that the film will see Jeepers Creepers 2 star Ray Wise reprise his role of Jonathon Breck (the Creeper) and Gina Phillips as Patricia Jenner (the first film’s survivor). So, we may also see an origins type of story that will take us back to the Wild West, which I think is unfortunate; films that push cowboys and indians on us are usually pretty weak. I guess as long as the film doesn’t spend too much time in the stirrups, it’ll be ok. There may also be a revenge story going on in Jeepers Creepers 3.

There’s no denying that the Jeepers Creepers franchise breathed new life into the creature/slasher genre when it came out, and a third installment is long overdue.