Ridge War Z – Out Now, But Is It Closer To Max Brooks’ Vision?

Last September we brought you news of Ridge War Z, a seeming knock-off of the Brad Pitt blockbuster, World War Z. In the article I mentioned that I had yet to see World War Z, but that I’d read the Max Brooks novel of the same name. I’ve since seen the movie (go ahead and read my World War Z review), and can tell you that it has nothing really to do with the book. It’s also not a real bad movie, but it’s not a great one either. It’s also far from being a horror movie. My point then, which I maintain, is that Ridge War Z appears to be a truer telling of the Max Brooks story – and I hope that it is.

All that to say, Brain Damage Films’ Ridge War Z is currently available through cable operators such as Cox, AT&T, Verizon, Charter, SuddenLink, and via Internet providers Amazon Instant, Vudu, Google Play, Xbox, and more! The official DVD is also now available on DVD at Amazon for a measly $14.99. 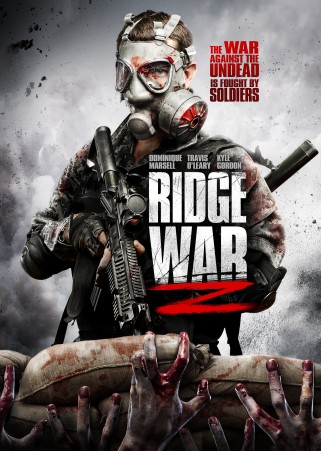 Three years have passed since the zombie war had been won, but for the veterans who fought in that terrible conflict, their memories and pain won’t let them forget. Now the only three surviving veterans of the most brutal battle of the entire war (Gory Ridge) return to recount their horrific experiences to an author who intends to write a book so that the world may better understand the sacrifice of the American infantryman during the great zombie war. It is a story of horror, honor, sacrifice, and brotherhood. This is war, scars and all.