Montreal HorrorFest 2013: The Hills Are Coming For You 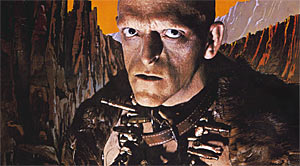 Wes Craven is known for putting actors on the map such as Johnny Depp, Laurence Fishburne, and Robert Englund through his legendary horror films. Horror icon Michael Berryman is no exception in the list of names, and you most likely remember his beloved face from The Hills Have Eyes. It’s practically impossible not to recognize the dude because of his distinctive physical appearance, which helped make Hills one of the creepiest films of all time, in my opinion. Berryman freaked you out when you were a kid, and he’ll continue to freak you out as an adult. He’s totally awesome and horror fans from around the world shouldn’t miss an opportunity to meet him.

Montrealers, get ready! The hills are coming for you in September, and it will be your chance to meet Michael Berryman in person, and possibly get a signed poster at the Montreal Comiccon 2013 in connection with HorrorFest.

Berryman was officially announced as a guest yesterday, and he will have a panel all weekend long at the annual convention. Plus, he will also introduce and do a Q&A for a new horror film entitled Below Zero on Friday, September 13, 2013.