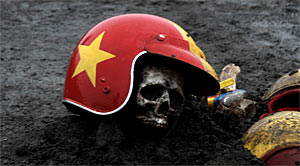 If you thought the Turbo Kid project was a dead break for Roadkill Superstar (RKSS) because there hasn’t been much news about it, then you are dead wrong and you must have missed the memo on Thursday.

RKSS and the entire team involved with the feature film project, including Hobo with a Shotgun director Jason Eisener announced that Turbo Kid has been approved for financing, and production will finally start early next year. Telefilm Canada with the New Zealand Film Commission will help fund Turbo Kid with filming scheduled for late February 2014.

In addition, the team also announced that casting has begun in Canada and New Zealand. So expect names to drop like flies in the upcoming months. We’ll make sure to keep our readers in loop when more details become available.

Who should play the title character? John Francis Daley? Jesse Eisenberg? Leave your say in the comments section below.

Turbo Kid is the story of a lonely orphan obsessed with comic books who scavenges the Wasteland in order to stay alive. When he meets a mysterious girl named Apple, he is must confront his fears and look to the hero deep within himself when both are targeted by Zeus, the sadistic and self-proclaimed leader of the devastated world. Armed with little more than blind faith and an ancient turbocharged weapon, the kid embarks on an incredible journey to rid the Wasteland of evil and save the girl of his dreams.