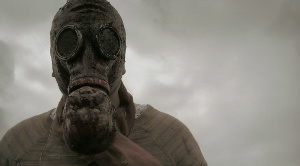 Babies suck. They piss and shit themselves. They drool. They can’t talk. They have to be transported from point A to point B. They sleep, but not when you want them to. And, last but not least, they cry… endlessly, which makes them scary. In this trailer for Amnesiac, a baby’s cry is looped, which makes it terrifying. Actually, there’s something inherently freaky about babies and horror movies. Maybe it’s the fact that they’re supposed to be innocent and sinless, and when they’re juxtaposed with evil they just become infinitely more sinister than Satan himself. See what I mean?

The point here is that the Martin Rutley-directed and Andrew Rutley-penned Amnesiac (2013), which will be available via VOD on September 1st and DVD on November 5th, looks creepy as hell. The film is a blend of supernatural horror and psychological drama as it counts the cost of loss, guilt, and reckless desperation of one deeply disturbed young woman and the afterlife of one equally disturbed dead man.

Amnesiac is a psychological horror at its purest, chronicling the creation of a malevolent haunting born from the depths of a tortured mind at the heart of the film’s narrative. In true literary fashion, this narrative gradually subverts the viewer’s assumptions, eventually revealing the horrific truth hidden beneath layers of calculated deceit.

There is a gem of a line buried underneath the trailer’s two bickering sisters and the crying baby loop, which is, “This is how people end up in psychiatric wards.” That should give you an idea of the level of obsession contained in the film.

In the wake of losing her baby, lonely Kate Faulkner has become dangerously obsessed with the occult, much to the horror of her only sister, Bec. One night, Bec and her boyfriend, Thom, visit Kate in order to try and make her see the danger of her obsession. Through the use of a Ouija board, they make contact with a mysterious spirit who offers to help Kate in her mission to find her dead son. But events soon take a menacing turn when the séance participants discover the true motives of the mystery stranger at their door and the dark, eerie place of child sacrifice known as Wyke Wreake.