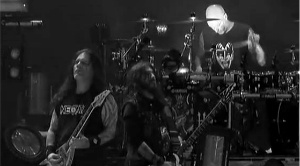 Formed in 1991, just as grunge exploded its emotional guts all over the place, it’s a wonder Machine Head survived as a band in an era when the world all but turned its back on heavy metal. With seven studio albums and a tireless work ethic, they’re not the biggest metal act around, but they’re one of the most legit bands in metal. As a result, Machine Head has some of the most loyal fans in existence.

If you’ve never seen Machine Head at work, you need to get your ass to one of their shows. If that’s not happening anytime soon, you can start with this live performance at Rock Am Ring from 2012. Machine Head (Robb Flynn, Adam Duce, Dave McClain, and Phil Demmel) ripped Germany a new asshole that day. Machine Head play like they’re possessed, and put on one hell of an intense and visceral performance.

Cue up the vid and prepare to have your night rocked.