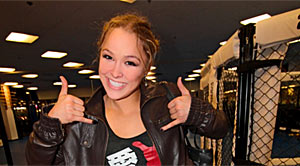 Want to get to know UFC Women’s Bantamweight Champion Ronda Rousey a little more before The Ultimate Fighter Season 18 debuts on Fox Sports 1 next month?

Then this epic Google hangout video with her and some of the best journalist in MMA will do the job. Rousey opens up about various topics like acting, her notorious rivalry with former STRIKEFORCE Bantamweight Champion Miesha Tate, her time on TUF, and everything in between. It’s a fun segment on one of the biggest UFC superstars today, but bear in mind that you will need over 50-minutes of your time to get the entire scoop on “Rowdy.”

Lastly, remember to tune in September 4, 2013, on Fox Sports 1 to watch TUF 18: Rousey vs. Tate. It will be the first time in the history of the show that both men and women will live under the same roof to compete for the title of “The Ultimate Fighter.”