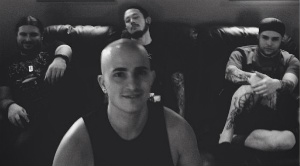 If you’re a Trivium fan, you’ll want to take advantage of the free download of “Brave this Storm,” available via the band’s cool micro-site at 02.trivium.fm.

Honestly, it’s better than I expected given Disturbed’s David Draiman as the album’s producer. On first listen, I felt that the track hardly resembled Trivium aside from Matt Heafy‘s vocals. After a few more listens, I have to admit that there is a Trivium sound there, but it’s buried under Draiman’s influence. So, yes, my initial fear that Trivium would end up sounding like Disturbed is partially confirmed here.

Like I said before, I understand that bands need to explore, grow, and evolve. I just hope the October 2013 release of Trivium’s Vengeance Falls doesn’t prove to be like Metallica’s black album, signalling a new mainstream era for the band.

My overall impression: I don’t like “Brave this Storm.” Let’s hope Trivium can “brave this storm” and get back to what they’re really about.