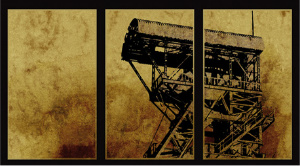 Germany’s Shakhtyor have released their self-titled debut through Cyclone Empire Records in Europe, and have now confirmed August 20th as the release date of the album in North America via Metal Blade Records! In celebration of the North American release of the album, lastrit.es (formerly metalreview.com) is streaming the second track from the album, “Handschuhmann.”

The track is wickedly awesome and, honestly, reminds me of Clutch at times.

Shakhtyor, the Russian miner, arises from the depths with pounding drums, massive bass, and walls of guitars. Since 2009, these three guys from Hamburg have been working on their blend of doom, sludge, post metal, and stoner rock. Beginning in 2011, they’ve regularly hit the stages to preview what was to come with their first full-length album, which was finally released in April 2012. Backed by positive feedback, and with new songs up their sleeves, they began playing the clubs across Germany, broadening their fan base among fans of Neurosis, Omega Massif, Ufomammut, or Entombed with every show.

If you want more from Shakhtyor, check out the first track from the album, “E. Jasper,” in the video box above.

Fans can listen to the opening track from the album, “E. Jasper,” now at metalblade.com/shakhtyor.