Under The Dome Gets Renewed 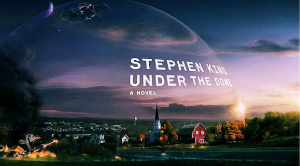 under the dome – credit: cbs

We’re not bringing you weekly coverage of Stephen King’s television adaptation of Under the Dome, but we are watching. It makes us happy that CBS has renewed the show for a second season — something should happen by then, right? Kidding… sort of. The show is slow, so let’s hope it’s a slow burn to something big, which it should be since it is Stephen King.

Basically, a small town gets covered by an invisible and impenetrable dome. It’s probably more like a sphere, but nobody can get deep enough under ground to find out. We have a power hungry and shady town councilman. The councilman’s son is a lunatic who kidnapped his booty call and locked her up in a fallout shelter. Sheriff is dead. Town minister is crazier than a shit-house rat. There’s a hit man/loan shark enforcer who got trapped when the dome came down, and although he killed someone he seems to be the most descent guy in the town. Oh, and among other things, two kids have gone into seizures chanting, “pink stars are falling.” And when they touch each other, the go into convulsions.

Yeah, so it’s the hottest show of the summer, drawing 12 million viewers each week. As far as Season 2 goes, King will write the first 13 episodes.