Until Dawn’s New Video, “This Fallen Fortress,” Plays Into Stereotypes 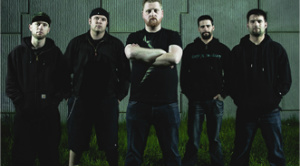 A Canadian band playing in the forest while snow comes down… it doesn’t get much more stereotypical than that. OK, well, I guess they could be eating maple syrup and salt & vinegar chips. Until Dawn‘s new video for “This Fallen Fortress” also features a growing team of hooded assailants who are, presumably, collecting the band members in a violent manner as they work menial jobs.

Given the lyrical meaning of the song, finding strength to overcome any life challenge, I’m not sure how the visuals reinforce that. Nonetheless, it’s entertaining and at least it’s not simply the band playing in the woods.

In additional news, Until Dawn have announced they will be touring this August for ‘The Alberta Horizon Crusade Tour’, which will include a performance at this year’s Farmageddon Festival and Loud As Hell Festival.