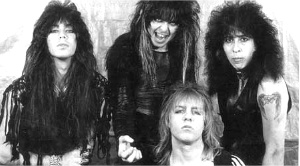 I know, I know. I have an unquenchable thirst for the highly underrated or underappreciated. It’s like being a vampire on a deserted island, and the lust gets stronger by the day. Or it’s akin to having the hots for the unpopular girl whom only you know has the most killer body under her disheveled garb and the most wicked personality. And, if nobody sings their praises in a public forum, then they might as well not exist.

And so… W.A.S.P., formed in 1982, is one of the most underrated bands to emerge out of the L.A. club scene of the ’80s. At a time when America was terrified of Satanic messages in music, W.A.S.P. pushed the envelope. Vocalist, founding member, and principle song writer, Blackie Lawless often threw controversy in the face of heavy metal’s opponents by throwing raw meat into the audience, but only after putting on a demonstration of his butchery skills, and by tormenting a hooded and bound half naked woman on stage. It can all be seen in the full concert video at the top.

What’s more is the fact that W.A.S.P. never went anywhere; the band has consistently put out a new album every few years or so since forming — even if Lawless is currently the only original member. Speaking of Lawless, he truly has one of the best metal voices I have ever heard; it’s raspy with great pitch and it is full of emotion and rage. Despite the raspy hoarseness of his voice, he belted out some of the best “ballads,” and the concert video above shows he could deliver live as well as he could in the studio.

The video quality sucks pretty bad, but the sound is good, and you get a total idea of what the atmosphere was like as W.A.S.P. performed their debut album live.