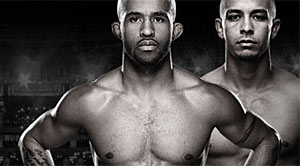 We haven’t touched much on UFC on FOX 8: Johnson vs. Moraga, possibly because it’s one of the least exciting free UFC events so far this year. Even as great of a UFC champion Demetrious Johnson is, I’m just not buying into the flyweight division yet for a number of typical reasons.

First, the division just isn’t stacked with enough well-known fighters. So far, I’m mostly familiar with Joseph Benavidez, John Dodson, Ian McCall, and Louis Gaudinot. Other than those guys, nobody else really rings a bell. Second, there just hasn’t been an exiciting fight since Johnson vs. Dodson in January. I’m well aware that the flyweight division is fairly new to the UFC, it kick started last year, so I’m hoping things will really pick up later in the year, or the next. For now, it’s easy for me to say it’s my least favorite division, and I’m guessing most feel the same way.

However, the fight that really has me interested in UFC on FOX 8 is in the welterweight division between Rory MacDonald and Jake Ellenberger. MacDonald keeps proving with each fight that he has the skill set to be the best, and with Ellenberger trash talking him since the bout was announced, everyone should expect this one to go down as the “Fight of the Night.” “Knockout of the Night” should be in the hands of Robbie Lawler, who faces Bobby “Vicious” Voelker tomorrow night.

All 24 fighters listed below will step on the scale this evening for the UFC on FOX 8 weigh-in starting at 7 ET at the KeyArena in Seattle. Make sure you stay tuned here on Yell! Magazine to watch it LIVE in a few moments.