I Survived An Interview With Victor Crowley, aka, Kane Hodder [VIDEO] 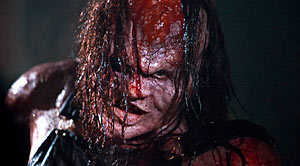 Some of the best conversations between interviewer and interviewee happen before and after the camera rolls. It would be nice to let you witness some of those moments. I guess with the camera off the pressure is off, which allows for a more honest conversation.

We interviewed Kane Hodder at Fantasia 2013 in Montreal, Canada, as part of the promotion for Hatchet III. What truly stands out is that this is not a man you want to fuck with. As intimidating as he is in person, just his physical presence is overwhelming, it soon became apparent that he is a gentle giant. At the same time, and he made it clear to us in a description of himself, he doesn’t have to go very far on the linear scale of human emoition to reach the point of rage. Before we started the interview, Hodder and a few others in the room were discussing a film Hodder had recently finished filming called Smothered. Directed by John Schneider, the comedy/horror is about a group of has-been slasher icons (who play themselves) whom nobody cares about anymore, nobody wants their autographs, etc. So, they go on a road trip and one by one, they get picked off by a big-titted serial killer. Sounds amazing, doesn’t it?

Through the course of the interview Hodder called me an asshole a couple of times, but you know, I deserved it, ha! Actually, it was within a friendly context and I honestly appreciated his candid nature. It’s indicative that the man in front of us was the genuine article.

After the interview, we learned that Hodder was a Mensa candidate. He took and passed the test even. He turned it down though, just as he turned down university by dropping out to pursue his acting and stunt career. I’m sure the majority of horror fans are thankful that he chose to become a slasher icon.

In addition to talking about Hatchet III, we also briefly touched on Among Friends, which was directed by his Hatchet co-star and friend (lucky man, right?), Danielle Harris. In a surprising role shift, Hodder will play the comic relief in her film. I’ll let him tell you directly about it.

Hopefully you learn a thing or two about Victor Crowley and Jason Voorhees, aka, Kane Hodder. Enjoy the interview.