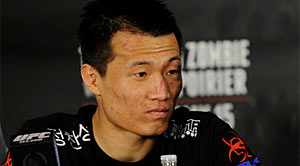 Chan Sung-Jung, also known as “The Korean Zombie” may not be the biggest household name in the world of MMA, but the guy has garnered much attention after being involved in two bouts in the UFC that were both regarded as “Fight of the Year”.

Remember his twister submission over Leonard Garcia anyone?

It wasn’t as awesome as the “Showtime kick” by Anthony Pettis, but the twister is still up there as one of the best moves in the history of combat sport, in my opinion. Unfortunely, even with all his recent success, Zombie may not be making the amount of money he should be considering his caliber and winning streak. The guys is just phenomenal, however, his UFC salary isn’t.

Here is what he will be making in the biggest fight of his career with José Aldo at UFC 163,

“I will be making 20,000 dollars to show, and another 20,000 dollars if I win. I do not get any PPV points. After 2 more fights, I will be able to negotiate my contract. Hopefully, I will be in a good position when that happens.”

Sure, he didn’t disclose the amount he will be making with advertisers, but doesn’t it still sound like the UFC is lowballing him?

Drop your comments below.