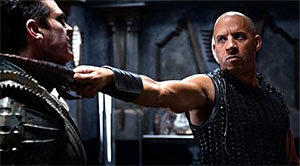 If you think Riddick is going PG-13 just like the previous installment, then we are thrilled to break some news for you today since the new red band trailer for the film just dropped and it’s pretty damn gory. It’s awesome to see that Riddick is going back to an R-rated post-apocalyptic adventure, and Vin Diesel couldn’t help but reassure fans at the San Diego Comic-Con that the franchise is finally back on track like the original. A dark and gritty version similar with Pitch Black.

“Yeah, I think it’s fair to say there’s a lot of similarities with Pitch Black, which was something that the audience, the fans, really wanted. They wanted us to leave the PG-13 behind and go back to an R. We all know how hard that is to do in Hollywood…”, Diesel said in interview with Total Film.

Additionally, he also talked about his new co-star, a four-legged beast (dog) who acts as his companion.

“The dog is in some ways my co-star, which is very Riddick.” Shades too of Mad Max? “It could look a little Mad Max-y,” he said. “Funny you should say that. I remember back when we were shooting Pitch Black, one of the actors was saying, ‘Oh, this is just going to go to DVD. Why are we killing ourselves?’ And I remember the DP, David Eggby, saying, ‘I remember working on another movie where someone said that. It was called Mad Max!’”

Riddick opens in theaters on September 6, 2013, including IMAX screens.