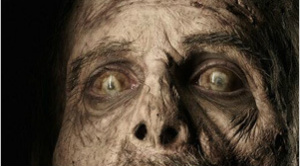 The Walking Dead, Season 4 is still about 3 months away, but the 2013 San Diego Comic-Con is in full swing. And coming from that nerd-boner-inducing event is a new image from The Walking Dead‘s Season 4. Last time we brought you an image from Season 4 it was of Rick standing in the woods with a lurking zombie behind him. Today, we have a leathery, decomposing zombie.

It’s hard to tell if this is just a promo shot or if it’s an actual scene on the set. Regardless, the amount of detail Greg Nicotero and his team put into these things is truly amazing and an inspiration for any aspiring makeup artist. And speaking of inspirations, it’s noteworthy that Nicotero worked under the zombie master himself, Tom Savini.

We spoke to Savini last summer at the Montreal ComicCon about, among other things, his biographical film Smoke and Mirrors: The Story of Tom Savini. There’s still no release date set for the film, but we did get an early screening of it and we only have good things to say about it.

Bah, but I’ve gotten off topic. The Walking Dead returns to AMC in October. This image surely isn’t enough to keep you satisfied until then, so we’ll be sending you a box of brains in September.