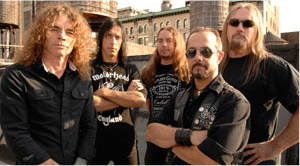 “This is where ‘Fuck You’ was born!” When a show opens with a line like that, you know you’re in for a helluva time.

In 2002, the Overkill brand of metal was all but dead, so it’s especially rewarding to see the rabid fans in this full concert of Overkill’s performance at the Paramount Theatre in New Jersey, which was filmed for the Wrecking Everything – An Evening In Asbury Park DVD. I think it’s a fair assessment to say that most thrash bands and the majority of thrash fans had given up on the genre. Of course, there are exceptions — Overkill being one of them.

People had turned to post grunge, pop, hip-hop, and other forms of music that are much more complacent and less agressive. Yes, there was Ozzfest and various summer fest (featuring some classic hair metal bands) keeping an active interest in metal alive, but all that was far removed from balls-to-the-wall thrash metal.

This Overkill performance was pivotal, in that it served to rekindle interest in the band and thrust them to new heights as they promoted their second live album, Wrecking Everything. Shortly after the release of this DVD, their first ever, they signed to Spitfire Records and released Killbox 13 to critical aclaim. Overkill toured relentlessly and put out another album, ReliXIV, in 2005. The band also had a hugely successful West Coast tour, which garnered attention from Megadeth’s Dave Mustaine, who put them on the 2006 Gigantour bill (I saw it, I’m proud to say), exposing them to a whole new generation of metallers. It also proved that the old timers could keep pace with the like of Lamb of God.

OK, enough fricken’ history. I think you’ll see how visceral and tight Overkill is as a band during this performance. Blitz has some of the best thrash metal vocals on the planet, D.D. Verni’s bass can take down buildings, Dave Linsk’s and Derek Tailer’s guitar work can cause seizures, and Tim Mallare’s drums can cause heads to roll.

Thrashers know these guys, but mainstreamers likely have no clue. Thrash has such a rich library of talent that it’s a true crime that so many of them are unrecognized. Let’s rectify that tonight.

Overkill: Wrecking Everything – An Evening In Asbury Park set list: