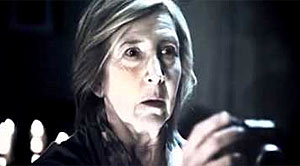 Remember the creepy ending from Insidious with the lady and the camera? It was one of the creepiest endings in horror that I can recall in the last few years. It’s pretty awesome that Insidious: Chapter 2 picks up right where we left off in the first installment, and we have the very first clip released that ties together both films.

You may want to check it out if you’re curious about the connection. We promise it won’t spoil much of Chapter 2, it will only make you want to see more. The famed horror team of director James Wan and writer Leigh Whannell reunite with the original cast of Patrick Wilson, Rose Byrne, Lin Shaye, Barbara Hershey, and Ty Simpkins in Insidious: Chapter 2, a terrifying sequel to the acclaimed horror film, which follows the haunted Lambert family as they seek to uncover the mysterious childhood secret that has left them dangerously connected to the spirit world.