You Gotta Watch The More I See’s New Video 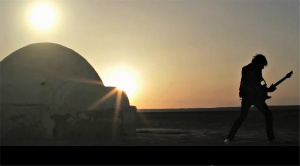 It comes as a total surprise that this has never been done before. Who in their right mind, with access to it, wouldn’t think to film a music video on a Star Wars set? Who hasn’t been affected by this franchise? Seriously!

Thank god The More I See thought to do it. The British metal band has just released their epic video for “The Eye That Offends,” which was recorded on the actual set of the Star Wars movies!

The band traveled deep into the scorching deserts of Tunisia to film at three iconic set locations from the Star Wars movies – remarkably still standing years after being abandoned. The result is a visual spectacle that we know you’ll love, whether you’re a fan of Star Wars or not (but really, who isn’t?).

The More I See’s frontman, James Cluer, talked about filming on the legendary movie set:

“I’m a massive fan of Star Wars, so to visit Tunisia and film at some of the greatest film locations ever was really special. It was such an incredible experience to perform at the mighty canyons of the Jundland Wastes [Episode IV: A New Hope], where Luke Skywalker and the droids R2-D2 and C-3PO first meet Obi-Wan Kenobi, as well as the city of Mos Espa [Episode I: The Phantom Menace], and especially Luke Skywalker’s home – Lars homestead [Episode IV: A New Hope]. It was a childhood dream of mine to see the igloo, and to get to film there with the sun setting behind us was something I’ll never forget!”

To celebrate the new music video, The More I See have also released a three-track EP exclusively on Spotify.

Look out for The More I See’s new album, The Disappearing Humans, on August 26th in Europe and October 1st in the U.S. In the meantime, enjoy the video!

May the force be with you!