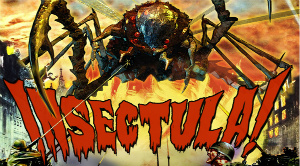 As far back as I can remember, creature features have been among the most fun sub-genre of horror. At once they harken back to a simpler cinematic time and provide a visceral joy. They’re calming like a Sunday morning and dozy like a 2 a.m. insomniac’s viewing.

The Syfy network has been digging into this sub-genre for quite a while, which may or may not have helped keep it alive or rejuvenated it, or something. Now, Big Ass Spider! is showing at Montreal’s Fantasia 2013 with some pretty big names in the cast, which leads me to believe that Insectula! might be the genre’s biggest shot at rebirth since David Arquette’s Eight Legged Freaks.

Good news! Actually, three bits of good news. First, the Syfy network has no part in this Insectula! (and we know, while Syfy creature features are as fun as any, they’re simply horrible). Second, I just came across the wickedly classic poster for the film, which was accompanied with a press release announcing the third bit of good news: A solid date of September 1, 2013, for a finished product. The last bit of good news comes from the fact that Insectula! makers have just penned a deal with Arsenal Pictures/G-Machine for post funds and distribution.

A giant alien mosquito-type insect is drawn to Earth from the CO2 pollution in search of blood. Del, a government agent, loses loved ones to the creature and is on a personal vendetta while Dr. Kempler is captivated by it and attempts to help the creature cleanse the Earth.