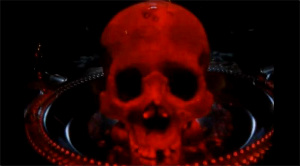 Here’s something that sounds like it could have been dug up from your hippy dad’s box of old vinyls. And it should, since Blood Ceremony’s lead singer and flautist, Alia O’Brien, claims Jethro Tull as her favorite band. Of course, as with most doom acts, the obvious Black Sabbath influence is present.

In Prog magazine, Alia states, “Tull are my favorite band. I’m going to see Ian Anderson doing both Thick As A Brick albums in Toronto in October. It’d be a dream gig to play with him one day. He still shreds on flute.”

Additionally, the Toronto-based doomers love the occult and classic horror movies, which plays a huge role in Blood Ceremony’s latest video for “Goodbye Gemini.” It’s rife with horror, occultist imagery, and even a smattering of classic ’60s-era special effects. If there was a little more blood and violence in the video, you might mistake it for a Necrophagia video.

“Goodbye Gemini” comes off of Blood Ceremony’s third album, The Eldritch Dark (May 28th via Metal Blade Records and Rise Above Records). You can pick up your copy at Amazon:
MP3 – $6.99
CD – $10.99

Yes, we love doom metal, but this track is a little on the soft side for our tastes. The more important thing for us was the horror element in the video, which was produced by Collective Evolution Studios and directed by Rouzbeh Heydari.