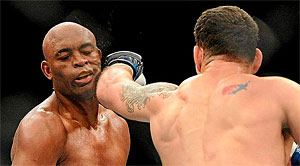 A rematch between UFC Middleweight Champion Chris Weidman and Anderson Silva is inevitable, even if Silva hinted at retirement in the post-fight interview with Joe Rogan at UFC 162. After a huge surprise when Silva was rocked by Weidman that turned the Middleweight division upside, the talk in the world of MMA has been nothing but a rematch, including UFC President Dana White, who insists it could be the “biggest fight” ever in UFC history. Personally, I second that statement, and rumor is Silva vs. Weidman II could potentially happen at UFC 168 on December 28, 2013.

“I’m flying to LA next week to go talk to [Silva]…Yes I do [expect the rematch]. Anderson Silva is going to get knocked out again by reality in a few days, and he is going to want to do this fight again… Actually, I am looking to do the rematch THIS year… It could be [UFC 168]. There is going to be a rematch. There is no way we don’t do this rematch.”

However, reports are now saying that White has retreated from this idea because the Women’s Bantamweight Championship will remain at the top of the UFC 168 card. Since nothing is officially set in stone, at this point, anything is still possible. Maybe Silva vs. Weidman II as the main event, and Rousey vs. Tate II as co-main event to draw in even bigger dollar numbers.

It’s all up in the air, but when the officially announcement is released, we’ll be sure to keep you in the loop.